Animals are hard wired for survival, and if the heavens made them one of the most adorable, docile looking creatures on earth, that has absolutely nothing to do with this drive. Most animals will do whatever is necessary to remain free, procreate, protect their young, keep their territory, and eat a belly full of something scrumptious. And thatâ€™s evolution. There is nothing bad or wrong about that. But we can all guess which ones we should not mess with. Itâ€™s the obvious dangerous looking ones, such as snakes, wild cats, bears, wolves, etc. Letâ€™s look at a few of the least commonly recognized harmful animals on the planet, which also just happen to be among the cutest, most beautiful, and most graceful. No matter what the species, it seems we all have this innate feature built in us to just adore cute, cuddly, and sweet looking creatures, yet â€“ caution is very much advised! Many of them are deceptively cuddly, furry, cute and wee, but these animals employ a variety of defense mechanisms that will - at the very least - make you think twice about giving them a pat on their head.

They do seem harmless, donâ€™t they? I own one, I adore it! But the fact is they can actually have salmonella and pass it on. It seems that the highest risk for the disease have the baby turtles. But it is not that while theyâ€™re small they have more cases of salmonella, itâ€™s just that the smaller they are the more interesting they are to children of small age. And we all know what happens when it comes to kids: whatever can be - will be put in their mouth. That of course includes their hands after playing with the turtles and potentially the turtles themselves.

They seem so cute and gooey, donâ€™t you think! The fuzzy head, the huge eyes and the hilarious look just make you think â€˜this is one hilarious looking birdâ€™. You probably also consider them very scared of anything because they have that habit of sticking their head into the ground. Well bad news for you! First of all they do NOT do that! Ostriches do not stick their head in the ground - that is a myth! What they do is that they flop to the ground and lay still when they cannot run from the danger. Second if, by some unfortunate case, you piss one of them off (or some misfortunate case more than one of them) they will chase you! And you better run fast, because they do! They can run up to an amazing 97 km/h (60 mph)!

Have you even heard of this creature? I know I havenâ€™t. I googled it, and if you look it up on the Internet you will find pictures of an adorably looking animal with huge brown eyes staring at you like a child. I mean â€“ just look at the picture! This little guy is also known as a sugar bear because they love eating sweets, and it looks like something between a squirrel, a hamster, and a chinchilla â€“ weird, huh? Interesting fact: Paris Hilton has one of these as a pet and she named it Baby Luv. Unfortunately the story does not have a happy ending because in 2005 the famous Hilton sister took it shopping with her and ended up attacked and clawed up all over her face by her own pet. Unfortunately Paris did not learn from her mistake so once again in 2006 Baby Luv sent her to the emergency room after she was bitten on the arm.

Have you ever watched a cartoon or a show where the hippo isnâ€™t the most adorable thing in the world? You did not. This is an animal most often presented in the positive contest. Just remember all the cartoons they star in. Itâ€™s because they round, huge with tiny eyes and ears, they look so gentle, and the width of their mouth they always seem to be smiling...like a childrenâ€™s toy. Yet these lovable creatures are very protective of their territory. They just love their mud. They will kill anyone approaching their mud pond whether it was intentionally or unintentionally. Even though they are massive (their hide alone can weigh up to half a tone) they can run up to 20 mph. One common gesture that can sign threat is their yawning. Again from the cartoons weâ€™re used to thinking of them as slow and lagging. Evidently it is not true. Their yawning is a sign they will attack. That way they are showing their long, thick, razor-sharp canine teeth, or tusks, with which they are capable of biting a small boat in half. And even though they are herbivore they are the animal that kills most people in Africa.

Now here is something you will probably not believe. These are most often described as intelligent, communicative, humane, altruistic, often very crafty when theyâ€™re suppose to learn something. And it is true dolphin are not harmful for people. On numerous occasions they have shown fascinating altruism and willingness to help our species for no obvious reason. Yet underwater creatures are not so confident in dolphins. Down in the deep they are known as a very intimidating factor. Even the great white shark (remember Spielbergâ€™s JAWS?) is afraid of this lovable animal. The truth is, down there, they can be violent. Also they are known as very sexually competitive. And not only do they act that way underwater but in interaction with humans too. There have been documented cases where theyâ€™ve attacked male humans because of their sexual competitiveness. The discovery that Bottlenose Dolphins were occasionally viciously reconfiguring their own children kind of goes along with our story, and last but not least the proof of their vicious nature is the finding that thirteen-foot male Bottlenose Dolphins were hunting down porpoises, beating to death and then playing with their corpses, all for no readily apparent reason.

Now this is a weird animal. It is a mixture of duck, beaver and otter. Besides theyâ€™re mammals and they lay eggs. They are unique in so many ways. Now when you hear about the combo and accompanied with a picture you donâ€™t really think â€˜now hereâ€™s a natural born killerâ€™. These animals are actually carnivore (they eat insects, larvae, shellfish and worms) and males are really venomous. They have sharp stingers on the heels of their rear feet and can use them to deliver a strong toxic blow to any foe. There is a pair 15 mm long hollow spurs placed along the inside of their hind legs. Inside these spurs is a moderate toxin, which can be quickly delivered to an enemy (or their own kind) with a fleeing kick. The venom is deadly for small animals, and while not typically fatal for humans, causes excruciating pain that can last for weeks, if not months. Along with the pain it causes rash and muscular weakness.

Monkeys are usually known as human ancestors, and of all the different sorts, chimpanzee is considered our closest relative sharing 98% of our genetic blueprint. Humans and chimps are also thought of sharing a common ancestor who lived some four to eight million years ago.They are the only mammals on the face of the earth that so much look like humans when it comes to hands (with opposable thumbs), brain function, and facial expressions. Unfortunately aggression is also one of the attributes that makes our two species very similar. Chimpanzees have been documented as having bloody feuds with each other, resulting over territorial or other differences. Countless â€œtrainedâ€ chimpanzee pets have also been known to attack on their owner or friends, causing serious injury, such as mangled hands (even torn off in some cases), shredded faces, broken bones, etc. One important difference between a chimpanzee and a man is their skeletal muscle structure. The chimp has as much as 7 times the strength of a human, leaving little hope of defending ourselves if they are to attack us. 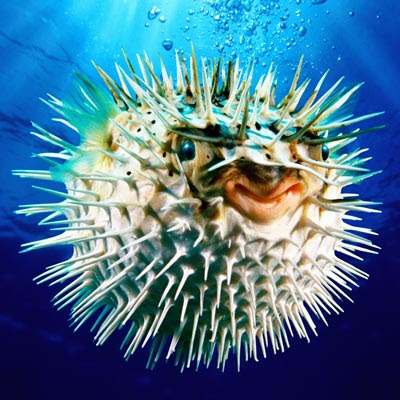 Okay, so puffer fish is probably the most hilarious thing in the sea world. Let me introduce you to Mrs. Poppy Puff from SpongeBob SquarePants. It is also known as blowfish, globefish, swellfish, fugu and toadfish. It is scale-less and has a skin texture varying from rough to spiky, and can inflate itself to double its size by swallowing air or water when threatened. Believe it or not there are more than 120 different kinds of this little fish. Among those the dwarf puffer fish, also known as pea puffer fish and pygmy puffer fish, is the smallest species of puffer fish in the world. But puffer fish don't just rely on their inflatable belly as a way of dissuading predators. These little guys are actually packed with the deadly neurotoxin tetrodotoxin. This tetrodotoxin is 1,200 times more poisonous than cyanide. One puffer fish contains enough tetrodotoxin to kill 30 adult humans. The tetrodotoxin has no known antidote till date. This makes it not eatable for fishes but for humans, apparently, when prepared correctly, the minute traces of the toxin give you tingly lips and light-headedness. The Japanese prepare a delicacy called fugu, from puffer fish meat. The dish is prepared by well-trained and licensed chefs only, as one wrong cut can cause certain death. Tetrodotoxin is a muscle paralyzing substance, so if you overdose, your muscles no longer move, including your diaphragm. You become paralyzed, and unable to breath, slowly asphyxiating under the weight of your own chest.

Now hereâ€™s something everyoneâ€™s hard to believe.They are one of the most popular house pet and one of the cuddliest ones too. Well, not specifically kittens, but something they carry: Toxiplasmosis. That's a parasitic disease that lives in many cats, which can get passed from mother cat to kitten, and, that's right; you guessed it, straight on to humans. You get it from contact with cats' feces, which is more or less inevitable, as you're the one cleaning them after they go potty. If you are infected by it you'll most likely just recognize flulike symptoms, and feel better after a week. That is one scenario of course. Let us say, for example, you're immuno-compromised. Say, you're pregnant, HIV+, on chemo, just had an organ transplant, something like that, that makes you more vulnerable. Then you might as well get inflammation of the brain, scarring of the eyes, andâ€”occasionallyâ€”horrific skin lesions. If you get through this all okay, scientists are just beginning to realize that Toxiplasmosis plays a part in schizophrenia, so it'll even drive you mad. And your cat almost certainly has it.

Elephants are truly beautiful animals â€“ gentle giants, as most of us believe they are. We consider them peaceful, kind, loving, and we now they have even been documented to tear whenever a mate or child dies. This is not questionable. However, nobodyâ€™s perfect, and these beauties can on the other hand be the worst choice to mess with. The biggest problem lies in their pure size and strength â€“ which is kind of obvious so it should not be ignored (for example African elephant is considered the largest land mammal). Every animal can get a little grumpy, like when a cat claws a hand for scratching its belly. If an elephant gets grumpy, however, one sweep of its foot, or joust of its tusk, and itâ€™s all over for whoever happens to be in its way. A number of zoo trainers have died at the hands of a seemingly â€œfriendlyâ€ elephant. They do not often take too well in captivity, and it has been said that the increased levels of testosterone in males during mating season, can lead to overly aggressive and uncontrolled attacks for seemingly no reason.

This Puppy And Baby Are The Most Adorable Nap Time Pals

5 Reasons Comics Had to go Digital

Movies That Will Make 2015 The Ultimate Year For Geekdom